The Fifth Principle Project is sponsoring a Meet the Author forum on the new book Against Illiberalism A critique of illiberal trends in liberal institutions with a focus on Unitarian Universalism by David Cycleback.  The forum is scheduled for Friday, September 16 at 8:00 pm Eastern. To receive a link to this Zoom forum, please register below.

Register for Meet the Author Forum

All are invited. However, if you wish to participate in the discussion, make a comment, or ask a question you will be required to turn on your device camera and directly speak to the forum. In order to foster a free-flowing conversation, we have opted not to use the Chat feature for questions.  In short, we ask that if you have a comment or a thought to share, please engage in the conversation and not use the Chat feature. 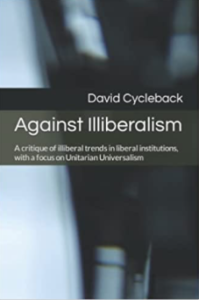 This book examines recent illiberal trends in traditionally liberal American institutions. It focuses on Unitarian Universalism, a historically liberal church whose national leadership has adopted an extreme authoritarian version of anti-racism as a “theological mandate,” causing strife and division.

While the various racial injustice models offer important insights into race and society, the author believes in classical liberalism, freedom of speech, and the free exchange of ideas, things that many extreme social justice movements and activists groups oppose. Freedom of speech and expression and the respectful exchange of ideas inherently support diversity and multiculturalism. Illiberalism, dogmatism, censorship, and authoritarianism are oppressive of all groups, minority and majority, and should be rejected wherever they appear.

As there are no simple or objective answers, this book encourages discussion. The most intolerable aspect of recent illiberal trends, and a key reason for the author writing this book, are the attempts to suppress the open exchange of ideas.

David Cycleback, PH.D. is Director of the Center for Artifact Studies and a member of the British Royal Institute of Philosophy. He is the author of ten university textbooks in cognitive science and philosophy, including Cognitive Science of Religion and Belief Systems, Nature Limits of Human Knowledge, and Philosophy of Artificial Intelligence.

Review of Against Illiberalism

The Nefarious Doctrine and Praxis of ‘Woke Culture’ a review from Dick Burkhart of Against Illiberalism: A critique of illiberal trends in liberal institutions with a focus on Unitarian Universalism By David Cycleback (2022)

Cycleback is a no-nonsense kind of guy, a scholar who digs in wearing a skeptics hat, alert for injustice masked by beguiling mantras. Thus, this concise and well-documented book begins with an expose´ of Critical Race Theory (CRT). This is because CRT has played a key role in the cultural wars, radicalizing formerly liberal institutions to mirror their antagonists on the far right. Cycleback examines the case of Unitarian Universalism (UU) in detail since the damage has been recent, dramatic, and not widely known, even among UUs (stealth and deceit are key CRT, or woke, strategies).

Later in the book he cites authors, such as John McWhorter, who’ve been impressed by the religious nature of CRT – it operates like a fundamentalist religion. In the UU case there has been a coup, with new leadership determined to replace UU liberal principles (especially rights of conscience, expression, and democratic governance) by domineering practices based on the beliefs of CRT, but in a surreptitious manner. Read More. . .

David’s book is the fifth in a series of books written by UUs crtically critiquing UU leadership use of authoritarianism to reshape the liberal values of Unitarian Universalism.

The kids are alright. Are the UUs?
This article in Persuasion offers hope and shares how tough normally polarizing issues can be discussed so as to bring people together. It appears that the UUA would prefer a purge over finding a common language to discuss and appreciate our diversity of opinions.

Please replace the coma after “multiculturalism” with a period, in the third paragraph in the About Against Illiberalism section.

Robin, thank you for your observation. Correction made.

I think Anne Schneider actually has 2 books out about the UU proposed 8th principle. Has anyone researched how many BIPOC have become UU since DRUMM and various other newer groups have been established?

I appreciate the concerns about ‘white supremacy’, systemic racism, and things like microaggressions, but we must be able to hear and listen to all concerns without censorship.

Your requirement for engaging eliminates anyone in David’s area (this is at 5 p.m. in our time zone) who would be accessing from a library shortly after work, as our public library computers do not have mikes. Author’s prerogative, of course.

KL, we value your input and hope you may be able to make alternate arrangements. If you can attend only by phone (audio), we will notify the Moderator of your situation.

Hi all,
Just a small typo on the registration confirmation page…

Just ordered the book. I am a great fan of David’s lucid and insightful writing. Look forward to reading it.